The Sindaa Youth of the National Democratic Congress in the Sawla-Tuna-Kalba District of the Savannah Region has lamented over the state of heightened insecurity under the Akuffo-Addo led NPP government.

According to the youth group which says NPP is synonymous with violence, insecurity has become the order of the day with numerous state-sponsored attacks on innocent citizens such as journalists, religious leaders, political opponents, security agencies ad infinitum.

In a speech read on behalf of the group at an inaugural ceremony, madam Kipo Jennifer recounted the violence that characterised the Ayawaso West Wuogon bye-elections, the documentary titled

” by Ace Investigative journalist Manassey Azure and the recent attacks on voltarians and other innocent journalists and citizens during the just ended voter registration exercise to back their claims”. 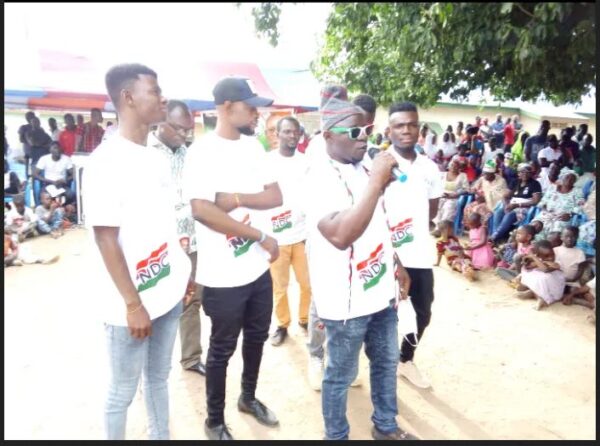 She reiterated the fact that the NDC has strengthened the global quest for inclusive democracy through the appointment of Professor Jean Nana Opoku Agyemang as running mate to the party’s flagbearer, a decision they believe was giving the NPP a whole lot of sleepless nights.

The group wondered why the best of an NPP woman is to know how to shoot a gun at polling stations, admonishing president Akuffo-Addo to call his appointees and party members to order, whilst leading a violence-free exemplary life himself.

In directing their lamentations towards the president, the group said: “Are we in a war? Politics is not about bloodshed but a competition over issues and ideas. May the souls of all those who lost their lives as a result of the recklessness on the part of the NPP government rest in perfect peace”.

They assured all constituents and citizens that the John and Jane ticket will restore peace and tranquility in the country and ensure that the protection of human lives becomes key responsibility of the government come January 2021.

The president of the group, Mr. Kipo Saaka called on Ghanaians to apply the Kuffour principle of “measure your leaving and cast your vote” to make a discerning decision of voting out the super incompetent Akuffo-Addo led NPP government that has so much overburdened the ordinary citizen for four years.

He said the NPP government has failed Ghanaians and cannot boost of any single achievement in the Sawla-Tuna-Kalba constituency, adding that,” we are poised to ensure this rescue mission where we would have a reduced tolerant and peaceful government beyond family and friends; where primary healthcare will become free for all and where media and press freedom will be restored”.

The Savannah Regional Chairman of the NDC, Alhaji Imoro Seidu, who chaired the occasion, commended the group for the bold initiative towards rescuing Ghana from the unacceptable path of economic and social mismanagement.
He said the NPP government has already lost power, encouraging the youth to work more hard towards returning Ex-President John Mahama back on power for a prosperous Ghana.

According to him, farming which is the main occupation of the people of Sawla-Tuna-Kalba constituency has become very unattractive under the current administration, pledging a restoration of the situation should John Mahama win the 2020 polls.

The Savannah Regional Secretary of the party, Mr. Sualisu Biuwurbi said the future of the youth of Sawla-Tuna-Kalba constituency is very bright in politics and under the NDC.

He applauded the courage of the youth in standing up for the truth, adding that, His Excellency John Dramani Mahama is returning to government in 2021 with lots of hope and job opportunities for the youth.

Victory he said was assured for the NDC, further stating that, the rescue mission the party was embarking on requires a lot of sacrifice and commitment beyond any monetary inducement.

The Member of Parliament for the Sawla-Tuna-Kalba constituency, hon. Andrew Dari Chewitey disclosed that the youth group has already prepared the grounds for the much-awaited victory of the NDC come December 2020.

He said the almighty God has already made the way for the NDC in the forthcoming polls, pledging his full support for the youth group.
Among other things, he said the NDC has embarked on massive visible infrastructure projects in the constituency, unlike others who are touting some nonexisting projects in a so-called tracker that cannot be factually tracked.

Also present was the MP for Salaga North, hon. Alhassan Mumuni, former appointees and Members of Parliament, regional and constituency executives of the party, cadres, chiefs, sympathizers and supporters of the party and the media.