The Driver and Vehicle Licensing Authority (DVLA) says it has commenced investigations into the circumstances that led to two motor vehicles bearing the same registration number plate marked GR 2050-20.

The vehicles are a white Nissan Rogue SUV and a black Range Rover SUV.

The black Range Rover, which was purportedly gifted to media personality, Nana Aba Anamoah, on her 40th birthday last week, became headline news on social media after it turned out that the number plate was registered to a white Nissan Rogue.

A statement released by the DVLA on Tuesday, June 23, said the number plate was duly registered and assigned to the Nissan Rogue.

It said, however, that the checks in its system indicated that the Range Rover had not been registered.

Consequently, the DVLA said it has commenced an investigation into the circumstance that led to the violation of the road traffic law and that it “would not hesitate in its efforts to bring the perpetrators to face the full rigors of the law as these infractions have security and safety implications to road users.”

It further urged the owner of the Range Rover SUV to visit any of its offices to regularise the process for genuine registration number plate.

Photographs of the Range Rover Sport went viral last Friday when Serwaa Amihere, Nana Aba’s colleague at GH One Television shared an image of the broadcaster holding bouquets of flowers in front of the vehicle on the occasion of her birthday.

Soon photographs and videos of the vehicle – whose cheapest model (Discovery) starts at $52,300 – were all over the web.

Some eagle-eyed netizens took notice of the registration number and used the DVLA’s USSD code *920*57# (below) to check its insurance details.

A screen-grab of the USSD code showed that the registration number belongs to a Nissan Rogue.

Over the weekend, pictures of the Rogue with the same registration number popped up on social media.

Read the entire statement below; 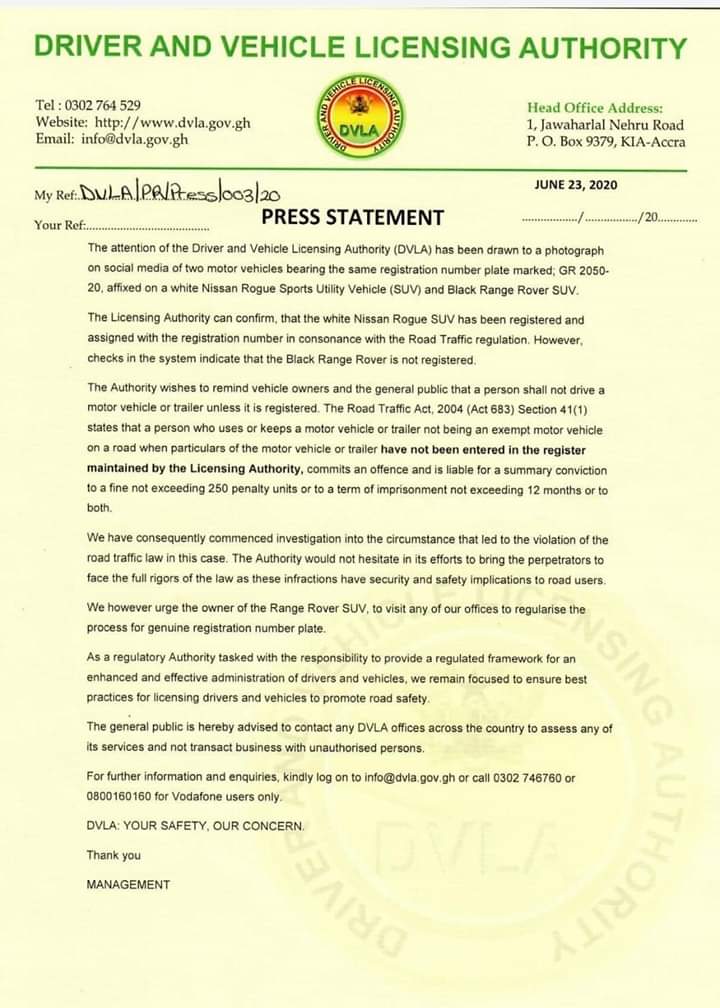