Eight (8) out of sixteen (16) regions of the country have recorded coronavirus cases after the national case count hit 408.

This means the country has confirmed 30 new cases after President Nana Addo Dankwa Akufo-Addo announced on Thursday that the case count stood at 378.

“Of the 408 confirmed COVID-19 cases, 205 were reported from the routine surveillance, 88 from enhanced surveillance activities and 115 from travellers under mandatory quarantine in both Accra and Tamale,” the Ghana Health Service (GHS) reported on Saturday afternoon.

The death toll has also increased from six (6) to eight (8).

“Over the past twelve (12) days (since the introduction of the enhanced surveillance), a number of measures have been introduced to control and prevent further spread of COVID-19 in Ghana. Among these include restrictive movement in the hotspots of the outbreak, intensive contact tracing and laboratory testing, social distancing, and intensive public education. These measures have resulted in a sudden increase in case detection, with high number of cases being reported,” said GHS.

“As of 10 April 2020, 23:00 HRS, a total of 27,346 persons have been tested with 408 being positive for COVID-19. The breakdown of the 408 positive cases are as follows: four (4) have been treated, discharged and have tested negative, 394 cases have been categorised as mild disease on treatment, two (2) moderate to severe cases, none currently on ventilators and eight (8) have died,” it added. 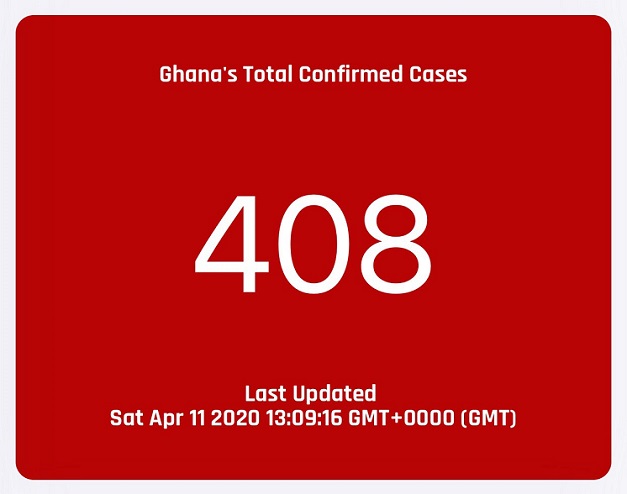 In his 6th televised address on the country’s fight against the pandemic, President Akufo-Addo extended the restrictions on movements in Greater Accra, Greater Kumasi, Tema and Kasoa by one more week.

A 14-day restriction on movement had been placed on the aforementioned areas because significant numbers of virus infections had been recorded there.

The lockdown, according to the president, is to limit and stop the importation of the virus; contain its spread; provide adequate care for the sick; limit the impact of the virus on social and economic life; and inspire the expansion of our domestic capability and deepen our self-reliance.

While praising the populace for adhering to the protocols and asking for continued patience, he announced an extension on the basis that the country was not yet out of the woods.

“Clearly, until we have the situation fully under control, we cannot, at this time, open our borders. They will have to remain shut until further notice,” he said.

“Further, the partial lockdown of Accra and Kumasi has facilitated a more aggressive programme of enhanced contact tracing, with a total of four hundred and fifty (450) teams… So, the decision has been taken, through the issuance of an Executive Instrument, to extend the restrictions on movement in the Greater Accra Metropolitan Area and Kasoa and the Greater Kumasi Metropolitan Area and its contiguous districts by one more week, beginning 1am on Monday, 13th April, subject to review,” the president added.

Prices of petroleum products to go up 5.5% – COPEC