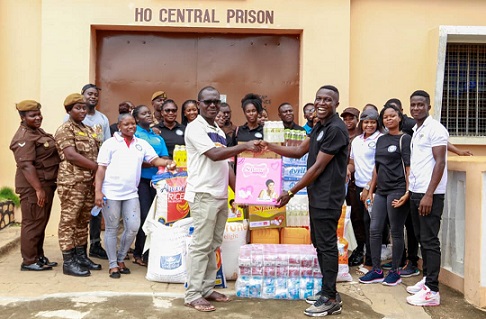 A Non-Governmental Organization, Volta My Pride has donated to the Ho Central Prisons in the Volta as part of their annual program.

The main objective of the group is as Volta and Oti indigenes we conduct a survey in the Volta and Oti Regions and see pressing needs and in their small see the best to tackle.

So this year the Association centered on the Ho Central Prison and donated some items to the inmates.

Items donated were bags of rice, gari, toiletries, slightly used clothing, detergents, soap, and soft drinks among others which in sum was close to 10,000 Ghana Cedis.

Speaking to the Public Relations Officer for the Association, Mr. Joseph Tsidi said the Association single handedly funds the program with no external funding whatsoever.

According to the PRO, they spoke to some of the Prison Officers which informed them on what the inmates will need.

“We funded everything ours because the Association is made up of various professionals such as the Police personnel, teachers, designers, casual workers as well as students who are in the tertiary level. So when we found a challenge, particularly in the Volta and Oti Region we designed a program and raised funds for it,” he disclosed.

He continued “One of the major problems we found is each prisoner is given one cedis eighty pesewas for the whole day. When you divide that amount it means they take sixty pesewas morning, afternoon, and evening so you can imagine what that amount can do. That’s a small amount.

“So we are appealing to the government to increase the amount for each prisoner so that they can be well fed. We realized that feeding is one of their major challenges. So they requested foodstuff and all that.”

Other challenges he said the Association uncovered is the conjunction at the prison and the kitchen of the Prison that needs renovation to avoid rain entering their food during the rainy season.

“One of the prison officers said the facility is supposed to take 127 prisoners but currently there are 458 inmates. That’s times three of the original number they are really conjunct there. There will not be enough breathing for them. So the government should try and expand the facility,” he added.

One of the founders of the Association, Reuben Mawuli Fugar indicated that he is overwhelmed with the enthusiasm displayed by the members in contributing to the donation. He also encouraged them to continue their selflessness in building Volta and Oti Regions.

The Chaplain for the Prison, Rev Fr. Francis Eboowho received the items and was grateful to Volta My Pride Association. He called on other benevolent organizations to emulate the kind gesture of the Association.