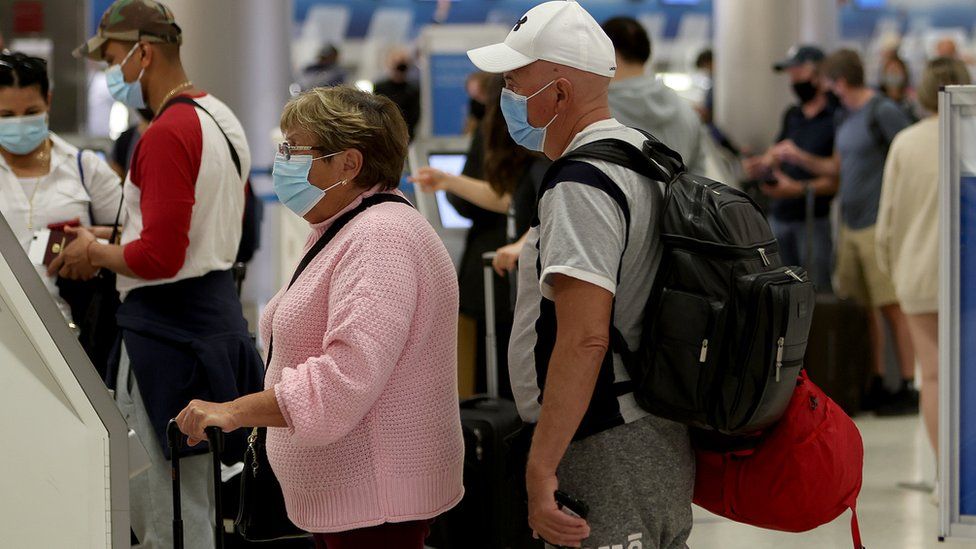 Flight cancellations in the US have hit a new peak in a Christmas season hit hard by the Covid-19 pandemic and bad weather.

Nearly 4,400 flights around the world were cancelled on Saturday, more than 2,500 of them in the US, air traffic site FlightAware reported.

Airlines have been struggling with staffing problems with crew quarantining after contracting Covid-19.

Adding to travellers’ woes, heavy snow has hit the central US.

From the US cancellations, more than 1,000 are from Chicago’s O’Hare and Midway airports.

“Today’s cancellations are driven by Omicron staffing and weather-related issues. We did pre-cancel flights in anticipation of inclement weather. We’ve been contacting passengers early if their flights are cancelled to give them time to rebook or make other plans,” United Airlines said in a statement.

Sunday, when many people often return home from their Christmas holidays, is likely to bring further disruption, with more snow and heavy winds forecast.

“It’s too long and there’s no space to spend the time, get something to eat, it’s a long time here,” one traveller stuck at O’Hara airport told ABC news in Chicago.

Watch: Fireworks and light displays as the world welcomes 2022

Since 24 December, more than 12,000 flights have been cancelled in the US.

Airlines have been trying to woo crew with extra pay to tackle the staff shortages. But unions say workers fear contracting Covid or having to deal with angry passengers.

The US is facing a surge in Covid-19 cases powered by the Omicron variant.

New York City has seen record cases despite high vaccination rates. The virus has hit everything from the police force to Broadway shows, although there has not yet been a significant hike in hospitalisations.

In his first speech, he said the city would not be “controlled by crises”.

“This pandemic has not only impacted us physically, but emotionally, and I’m going to really encourage people in this city to just find that inner peace, no matter what we’re going through,” he said.

“We have been through tragedies before. This is a resilient city and a resilient country and I want to bring that energy.”