Dancehall musician Stonebwoy is considering legal action against former label-mate Kelvynboy over some allegations he made after a scuffle which ensued on June 22, 2020.

The latter, during his appearance at the launch of a new Electroland Ghana Limited shop in Ashaiman, a suburb of Accra, was attacked by some persons, one of whom is said to be a sympathiser of Stonebwoy.

Read Also: Urge your people to come out and register – Mahama appeals to Tongor chiefs

The afrobeats artiste was seen in a viral amateur video struggling to defend himself from the clearly agitated attacker as the gathering shouted for calm.

This happened moments after the ‘Mea’ hitmaker walked into the shop with a camera crew inspecting the work done so far.

Following the fracas, the former signee of the Burniton Music Group took to social media to vent his spleen.

You send people make dem come beat me? ?
You think say Ashaiman be your own ?

He shared a series of tweets which fanatics users believe to be a subtle attempt to accuse Stonebwoy’s camp of orchestrating the scuffle.

“You send people make dem come beat me? You think say Ashaiman be your own? The moment you start fight me norr wey you Loose” he said in a Twitter thread.

The moment you start fight me norr wey you Loose ????

But lawyers for Stonebwoy’s team would not take it lying down.

In a press statement on Monday evening, the Burninton Music Group described the Kelvynboy’s “imputations of criminal conduct” as “very scandalous, and calculated to cause disaffection for Stonebwoy, our organisation, and our brand. 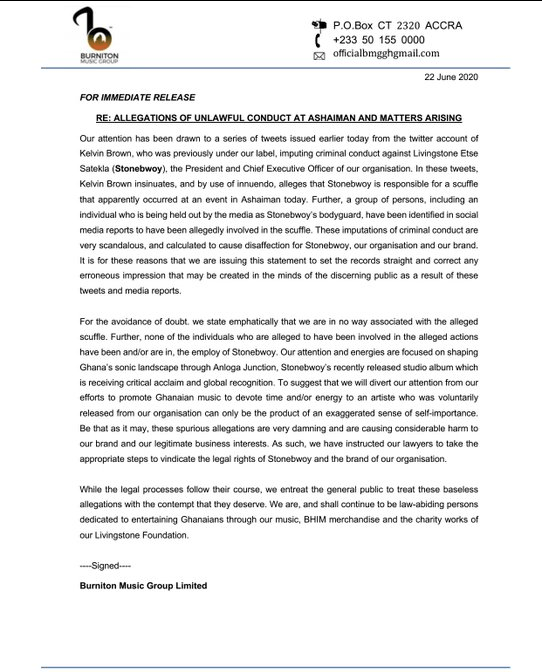 Distancing itself from the allegations, the Group further revealed that “we have instructed our lawyers to take the appropriate steps to vindicate the legal rights of Stonebwoy and the brand of our organisation.”

“To suggest that we will divert our attention from our efforts to promote Ghanaian music to devote time and/or energy to an artiste who was voluntarily released from our organisation can only be the product of an exaggerated sense of self-importance,” it further indicated.

Both artistes have been in the news since 2019 for some alleged misunderstanding which has culminated into the breakdown of a father-son relationship between the former label mates.

While it it unclear what exactly led to the recent bad blood, the latest development only goes to suggest that the longstanding friction among Stonebwoy and Kelvynboy is far from over.