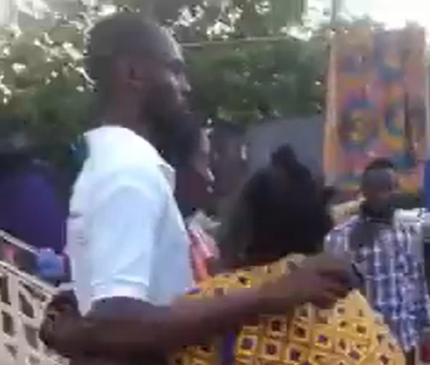 A taxi driver has won the hearts of many social media users for returning a fishmonger’s ¢8,000.

The fish trader, according to reports, chartered the unknown driver last Friday and forgot her money in the car.

Upon seeing the money the following day, the driver decided to return it to the woman at her home where he dropped her off.

Taxi Driver Returned ¢8,
000 to Passenger – The Man the woman is hugging is a Taxi driver and the women is a fish seller at Mallam Atta Market in Accra. pic.twitter.com/S0AcFr4jme

In a video published by Sir Alby on Twitter, about three women, including the victim had embraced the taxi driver while thanking him.

Another added, “We haven’t slept all night. We are grateful you returned it, Sir. Thank you very much.”

You see what this means to them, life is crazy man’s done so well. https://t.co/h8SHRAkgib

Barely two hours after the video was shared, social media users could not help but praise the taxi driver.

“God bless him, it’s not easy to do that in this current economy. God bless him,” one twitter user commented.

“There good people in the world,” another noted.

A similar incident happened in Liberia in October 2021, where an 18-year-old motorcycle taxi rider found and returned $50,000 (£36,000) to a businesswoman who had lost the cash in the northeastern Nimba region.

The young lad was subsequently rewarded by the Liberian President, George Weah.

President Weah met Emmanuel Tolue at a ceremony in the capital, Monrovia and offered him cash and an educational scholarship.

The motorcycle rider was also honoured as he became a national hero for his action.

In view of that, social media users called on President Akufo-Addo, to honour the unknown driver.

Amongst them was, Sports journalist, Saddick Adams who said the driver should be rewarded for his integrity.

There should be reward for integrity. I wish we could raise some 10k for this driver. https://t.co/yabSkzf3s1