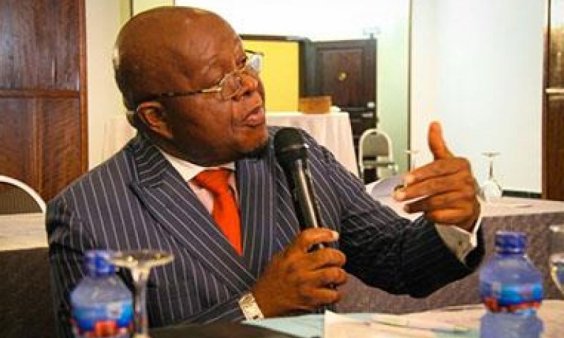 A former Speaker of Parliament, Professor Aaron Mike Oquaye, has urged the New Patriotic Party (NPP) to follow the traditions and principles of the Party to win the support of the people in its quest to retain power in 2024.
He said members of the Party must shun monecracy and abide by the tenets of truth, fearlessness, critique, and hard work.

“If we do that, Ghanaians would repeatedly come and knock at our door in order to invite our government to take over the reins of governance in this country,” Prof. Oquaye said.

He made the call when he launched a book in honour of the late Baffour Osei Akoto, a celebrated statesman and astute politician, in Accra on Wednesday, August 31, 2022.

Titled, “Baffour Osei Akoto: A royal Patriot and the making of Ghana,” the book is a collection of speeches and articles made by famous speakers about the exploits of the late Baffour Akoto, with particular reference to the “Annual Re: Akoto and Seven others” Lectures organised by the Ghana Law School.
Prof. Oquaye, who co-edited the book, described Osei Akoto as a man of valour and encouraged members of the NPP and its leadership to emulate his ideals and principles.

“If we (NPP) do otherwise, we will not be honouring those men of valour like Akoto, Danquah, Busia Dombo and others,” he said.

Outlining the contributions of Baffour Akoto to the country’s constitutional and democratic reforms, he said the celebrant fought for the protection of human rights and inclusiveness.
He said all the constitutions that had emerged after the 1960 Constitution (1969, 1979, and 1992 constitutions) guaranteed the rights of the people courtesy the efforts of Baffour Osei Akoto and others who stood against dictatorship.

“So today, when you invoke the rights that when you’re kept in prison you cannot be kept in an inhumane situation, you’re invoking the rights those people fought for,” Prof. Oquaye said.
Nana Professor Susubribi Krobea Boaten Asante, the Paramount Chief of Asante Asokore, described the late Baffour Osei Akoto as an “influential traditional and political leader in the history of Ghana.”

He said the submissions made by Baffour Osei Akoto’s lawyer, J.B. Danquah, in the famous 1961 Re: Akoto case, were “faithfully incorporated” in all constitutions that were promulgated after 1966.

“Although Danquah’s submission did not prevail in the Akoto case, they subsequently became the cornerstone of the judicial edifice, which was erected after his death for protection of human rights,” Nana Asante said.
Mr Stephen Ayesu Ntim, the National Chairman of NPP, said the memory of Baffour Osei Akoto “must be a lighthouse that beckons us to navigate towards patriotism.”

“We can best break the eight if we bear each other’s burden, forgive each other when we are offenders and work diligently to support the government’s efforts to ameliorate the plight of the Ghanaian people,” he said.
Bafuor Osei Akoto was born in1904 and died in 2002.

He was a Ghanaian agriculturalist, traditional ruler and politician.
He was the direct descendant of Asantehene Osei Bonsu and was chosen by Nana Sir Agyeman Prempeh II, as a senior linguist for the Asante-kingship in 1935, a position he held for 68 years until his death.

He combined his role as a traditionalist with national politics in the early 1950s.

As the founder and leader of the National Liberation Movement (NLM), he contributed to the formation of the NLM, the main opposition Party of Osagyefo Dr Kwame Nkrumah’s Convention People’s, Party (CPP).

He was among prominent politicians who opposed the rule of the Nkrumah government and pushed for multiparty democracy.