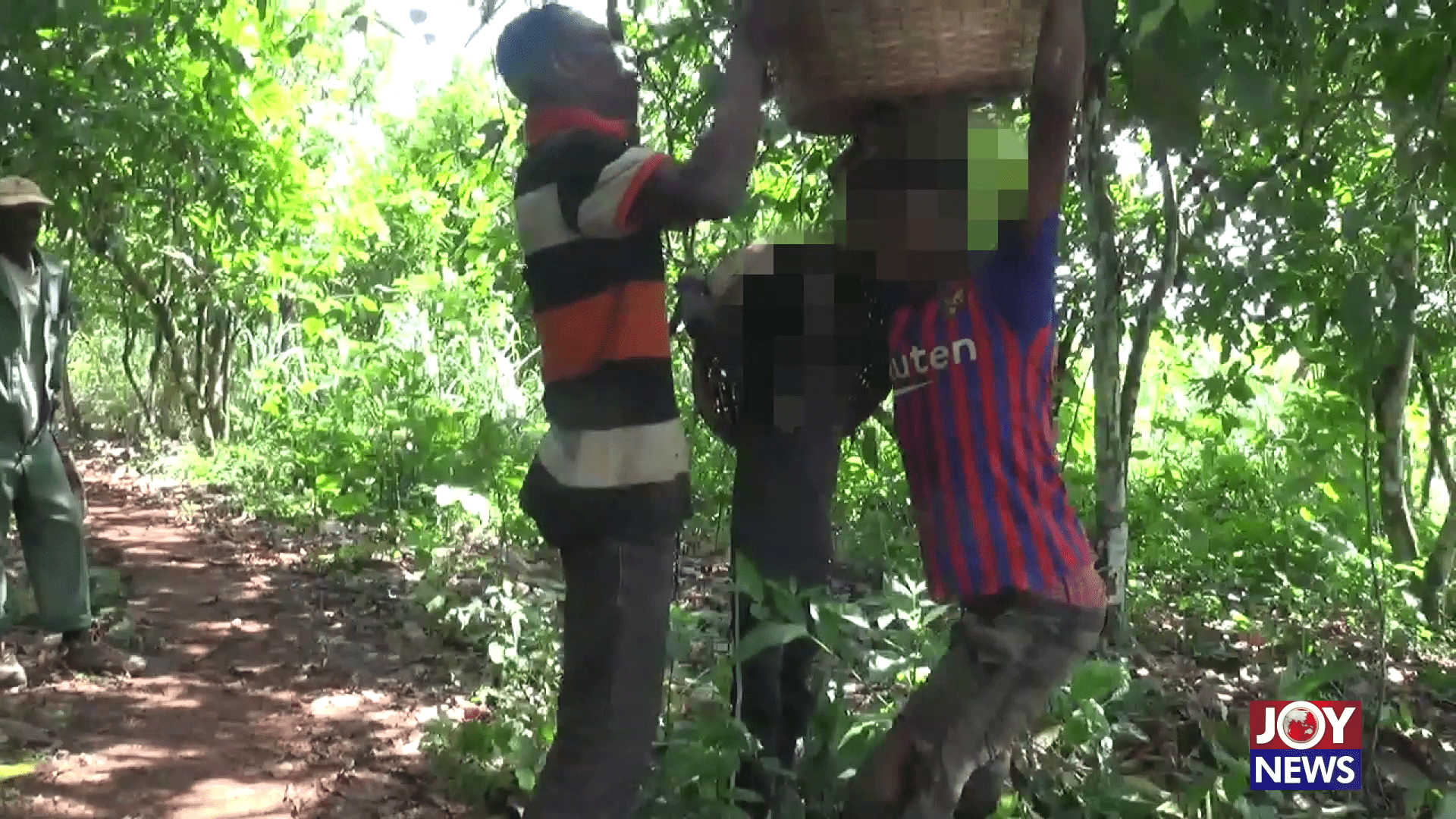 The children are trafficked and bought to endure long hours of drudgery.

Eight farmers captured in the latest JoyNews Hotline documentary, using children as labourers on their farms have been arrested.

A team of police and COCOBOD intelligence officials effected an arrest after an operation aimed at bringing all those involved to book.

The documentary, titled ‘Children in Cocoa Labour’ reveals how traffickers rented out children including 10-year-olds to cocoa farmers for as little as GHC 800 to work for a full year, weeding and carrying cocoa beans.

Musah Kwabena, one of the figures in the syndicate operating at Elluokrom in the Western North Region revealed to investigative journalist, Kwetey Nartey how he changes the identities of his victims to outwit security as he transports them to communities of service.

According to him, he entices the parents of the children to gain custody with the promise of exciting returns.

“I give the mother of these trafficked children GHC 100, I give the same amount to their father,” he said.

He added that he has a network of traffickers who aid him in the Northern part of Ghana, specifically Chereponi. They help him identify families with vulnerable children.

He revealed that before the transporting process, he negotiates with the security officials at the borders.

“The process is all about giving them money to bribe the officials. I give them GHC 200. I bribe the police at Ghana and Togo entry points to facilitate transportation, I forge the national identity cards of these children in order to outwit the officials,” he stated.

The spokesperson for COCOBOD, Fiifi Boafo, says the company is opposed to children working on cocoa farms and will do everything to protect them.

“We do not subscribe to this, anytime we see anyone engaged in this act, we will ensure that we deal with it,” he said.

He added that “In Western North for example, Elluokrom, maybe the Chief Executive is unaware but one of the farmers has been picked up. The police is currently taking the person through the process. In the Ashanti Region, a number of arrests have been effected and they are also going through the process.”

Commenting on the development, the DCE for Bia West, Benard Blay, says he has detailed the social welfare department to investigate and establish the number of children working on cocoa farms.

“ As I speak to the you, the social welfare department ready, I will have to refer this to them… It’s sad that these have happened, cocoa is good but we can’t deny children who are supposed to be in school in this thing,” he indicated.

The latest hotline documentary titled, ‘Children in Cocoa Labour’ will air on Monday, January 10, at 8:30pm on the JoyNews channel.