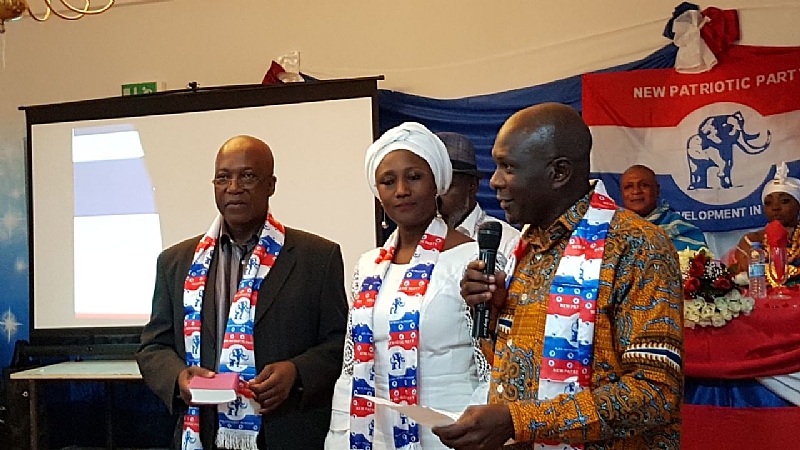 The Germany Branch of the New Patriotic Party (NPP) has branded the petitioner who wants the branch Chairman suspended, as a troublemaker rather than a normal activist.

Kwaku Appiah is said to have petitioned the party’s General Secretary, John Boadu, to have Rev. Alex Acheampong, the Chairman of the Germany branch, suspended from the party for “disrespect and insubordination.”

The petition is described by the branch as resembling bitter effusions from the petitioner, and the petitioner has no legal authority to participate in any party activities until his case is resolved.

According to the chapter, Mr Appiah is a prior defection from the party who was allowed back.

Below is the full statement.

It has come to the attention of the NPP Germany Branch through a media report, that, a suspended member and failed aspirant, Kwaku Appiah has allegedly submitted a ‘petition’ to the General Secretary of the NPP, John Boadu to have the Chairman of the Germany Branch, Rev. Alex Acheampong suspended from the party for what the suspended petitioner calls “disrespect and insubordination”.

The petition clearly is one resembling bitter effusions from an unhinged mind. Who is the petitioner? Kwaku Appiah is a former defector from the party who was mercifully allowed back into the party after many countless appeals and pretensions of remorse.

He, in 2017, after serving as the party’s Secretary for the Branch, went out of his way to swear in a losing candidate, Madam Rebecca Aboagye Sarpong. Prior to this political heresy, Kwaku Appiah had engineered his meagre supporters to breakaway from the party.

Post his political apostasy, he, indeed, ably supported by the losing candidate, Madam Rebecca Aboagye Sarpong, formed a parallel Branch. As a consequence, he was expelled from the party.

Fast forward to the current issues, Kwaku Appiah in his typical destructive fashion, has prepared, cooked, and served troubles in the Branch to mar the impending Branch elections. This mastermind of evil, has mounted many roadblocks including casting the party as a terrorist and violent organisation to outsiders such as an owner of a facility where the Branch had scheduled to hold its annual delegates congress.

He has written many letters to many offices here in Germany and in Ghana to drum home this point. Kwaku Appiah has instigated another breakaway from the party with his meagre supporters after his failed campaign to become chairman of the Branch. Having realised that he is very unpopular within the party due to his bile attitude, he has set forth to destroy the Branch. The Branch, has pursuant to the party’s constitution, suspended him indefinitely pending a full disciplinary probe into his bile conduct. With this background, it should be clear to any sound mind that, the person we are dealing with here is not your regular activist, but a fomenter of troubles.

Now to his petition. First, knowing Kwaku Appiah as a liar and a political apostate, we cannot confirm whether indeed, the said petition has been delivered to the party because the Branch has not received any notice from the headquarters in this regard. We are therefore urging the journalists to confirm from the party’s General Secretary.

Second, procedurally, all correspondence emanating from external Branches ought to be addressed to or through the director of International Affairs, Mr Attafuah. Therefore, a supposed petition addressed directly to the General Secretary, can at best, be described as wrong-headed.

Finally, and most importantly, we dispute all the claims contained in the so-called petition regarding the specific allegations against the hardworking Chairman, Rev Alex Acheampong. How can a decision taken collectively by the Branch Executive Committee be blamable on a single individual who by dint of privilege, is the chairman?

We, the Executive Committee, stand by – and take full responsibility for – the decisions taken and communicated to the party in relation to Mr. Freddie Blay. Without providing an iota of evidence, Kwaku Appiah in his typical lying self, claims the hardworking chairman is behind the pushback launched by Alhajj Sulemana, a member of the Stuttgart Chapter of the Branch against Mr Freddie Blay’s fiat. Such baseless accusations should be treated contemptibly much the same way as the carrier of the baseless accusation.

We are urging the media to treat Kwaku Appiah as an outcast since he has been suspended indefinitely. He has no legitimacy to undertake any activity as a member of the party until the final determination of his case. Until then, Kwaku Appiah remains suspended, and any claims emanating from him should be disregarded with urgent promptitude.