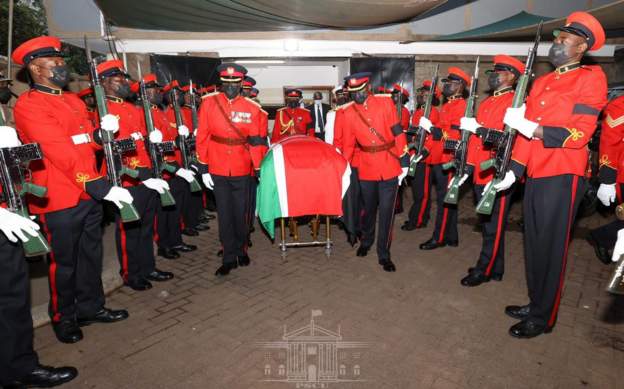 Mourners are gathering at Kenya’s Parliament to view the body of the country’s third post-independence President, Mwai Kibaki, who died last week at the age of 90.

Mr Kibaki’s casket, draped in the national flag, was earlier in the morning escorted by a military procession to Parliament where it will lie in state from Monday to Wednesday.

President Uhuru Kenyatta is scheduled to preside over the public viewing at Parliament.

Kenya’s Parliament which is currently on recess will have a special sitting on Wednesday to pay tribute to Mr Kibaki.

The late president will be given a state funeral with full military honours.

Local broadcaster, Citizen TV, has tweeted footage of the casket’s arrival in Parliament.

Body of the late President Kibaki arrives at Parliament where it will lie for the next three days #TheLastSalute pic.twitter.com/yu6qgQMw1L