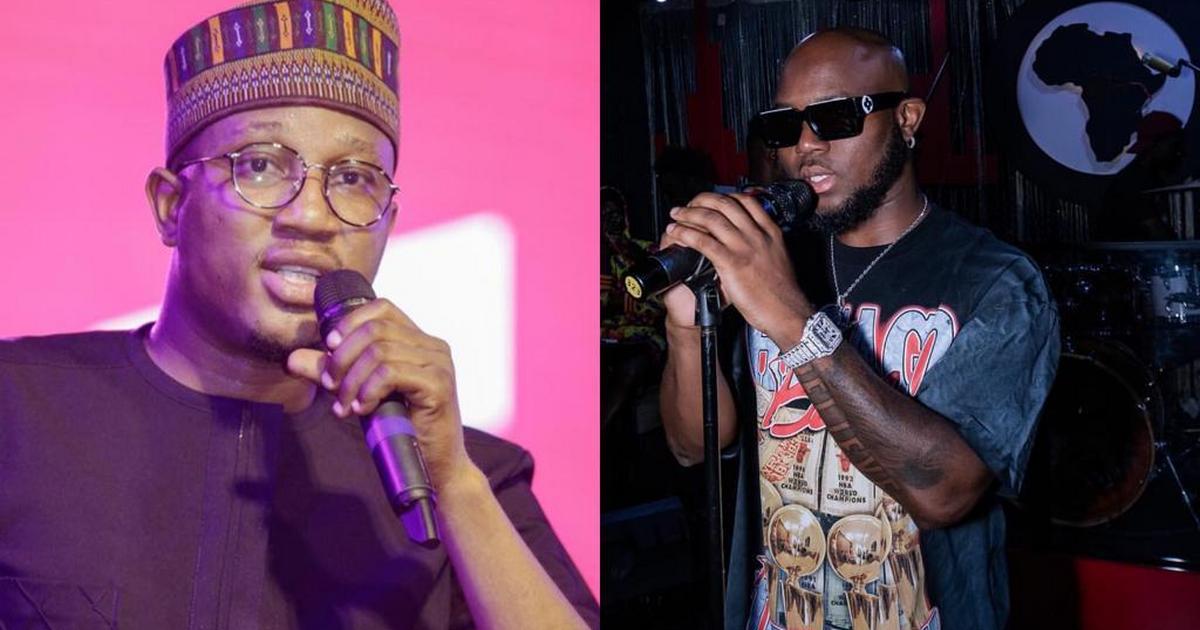 The CEO of 3Music Networks, Sadiq Addulai Abu and Afrobeat musician, King Promise have clashed over the reported ban of the latter’s content on the 3Music channel.

The two engaged in a heated argument on Joy FM‘s Showbiz A to Z programme on Saturday.

In January, 3Music CEO made a  decision to ban King Promise’s music videos from playing on 3Music TV and disassociate himself from the musician.

Speaking on Showbiz A to Z, he explained that there was a back-and-forth negotiation over the singer’s performance at the Wildaland concert. Although he did not receive a confirmation to add the artiste to the bill the first time, he was given the go-ahead to do so by the singer’s manager.

However, Killbeatz returned to disrespect him for going ahead with his directives. Mr. Abu added that these actions influenced his decision to disassociate himself from the artiste.

However, King Promise expressed his displeasure at the assertions of the 3Music Network boss, claiming that Sadiq tarnished his image with his claims.

The singer contended that for Mr. Abu to have chosen social media to state his concerns was disrespectful.

According to the ‘Abena’ hitmaker, although he was aware that his team and the organisers of Wildaland did not reach an agreement to have him perform, he had no idea the extent of their disagreement.

Hence, he was surprised to wake up one day to claims by the 3Music Network boss that he had been disrespected by his camp and manager, King Promise said.

The singer told George Quaye that he has had a good relationship with Sadiq over the years, hence expected to be told of any disagreements that ensued between him and his (King Promise) team.

“He’s gone on the internet to tarnish my image for no reason. I have known Sadiq before I blew up, even before I knew my management right now, we have our own personal relationship, that is why everything that happened I was very shocked,”

However, Mr. Abu said that he had had to endure disrespect from King Promise’s team and his manager Killbeats on various occasions and the incident which occurred during Wildaland was his last straw.

But, the ‘Ginger’ singer said that “I don’t talk business, money, car, I don’t talk nothing, all I do is go and sing and I and my management handles the rest. If you’ve had a disagreement or you couldn’t reach a bargain, you say you know me personally all you could have done was reach out.”

Meanwhile, Mr. Abu also believes that the singer could have equally reached out to him, rather than leave everything to his management.

He added that even despite his initial ban, the 3Music channel continued to play King Promise’s music because of how much he believes in the artiste.

But “because of the disrespect I am sitting in my corner” and staying away from all matters King Promise, Mr. Abu said.

However, King Promise said that he only realised the depth of the disagreements when he saw posts online about him and his team.

“I was surprised I was like what is going on here?” The singer quizzed.

He believes that Mr. Abu “chose to jeopardise the relationship you have with me based on the fact that you have an argument with somebody who is not me, even though it is my rep.”

Meanwhile, after some words of advice from the host of Showbiz A to Z, George Quaye and some panel including Uncle Ken and Chief Moomen, the two decided to bury the hatchet.