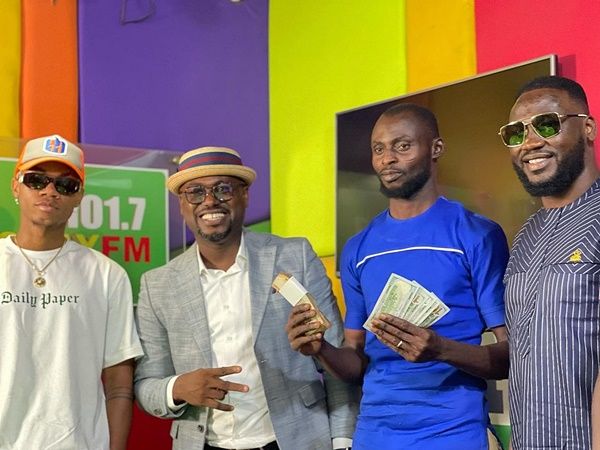 Afropop musician KiDi has gifted some money to the taxi driver who went viral for returning a fishmonger’s ¢8,000 after it was left in his car.

KiDi gifted the taxi driver, identified as Kwesi Ackon, ¢5000 when they met at the studios of Okay FM.

The ‘Touch It’ hitmaker noted his donation was his way of appreciating the driver’s honesty adding that Mr Ackon can use the money to buy water.

The taxi driver went viral and won the hearts of many people earlier in the week after a video of him returning a fishmonger’s ¢8,000 was shared online.

The fish trader, according to reports, chartered the driver last Friday and forgot her money in the car.

Upon seeing the money the following day, the driver decided to return it to the woman at her home where he dropped her off.

In a video published by Sir Alby on Twitter, about three women, including the victim had embraced the taxi driver while thanking him.

In an interview with The Fourth Estate after receiving his reward, Mr Akon said the incident happened on Easter Saturday, April 16.

Following the publicity of his actions, Vice President Dr Bawumia donated ¢20,000 to the driver for his act of integrity.

The Editor-in-Chief of The Fourth Estate, Manasseh Azure Awuni presented an additional GH¢2,500 from two other unnamed donors.

The amount was raised within 30 minutes through donations from benevolent listeners who were touched by the kind gesture of Mr Ackon.