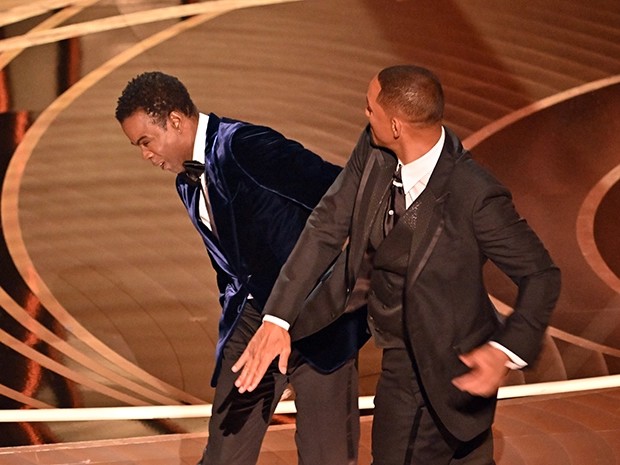 Will Smith smacks Chris Rock at the Oscars. (Rob Latour/Shutterstock)

The 2022 edition of The Academy Awards, popularly known as the Oscars, came along with many incredible achievements, but the most talked-about moment was undoubtedly the unfortunate physical abuse of comedian Chris Rock by actor Will Smith.

The slap that left Chris Rock briefly disoriented, resulted from a joke about the actor’s wife Jada Pinkett-Smith, which the couple found rather distasteful.

There’s a backstory to all this. While some saw the slap as an overreaction to a tactless joke, others pointed out a decades-long personal history in play.

Will and Chris go way back and first worked together nearly 30 years ago on the set of Fresh Prince. Chris also co-starred with Jada in a movie in 2015, then came the 2016 edition of the Oscars, where Chris Rock aimed some few jabs at Will and Jada while hosting.

Prior to the 2022 Oscars, Jada had previously shared her struggles in dealing with alopecia sometime back in 2021.

So many would assume it is an area where no one dares venture, especially during a period where she was present at an event with a bald appearance. However, a section of entertainment fans have alleged that Chris Rock’s joke referencing Jada to ‘GI Jane 2’ goes beyond issues about the bald appearance of both actresses.

G.I. Jane is a 1997 American film starring Demi Moore, who once dated and married Ashton Kutcher despite their 15-year age difference.

Demi was 40 and Ashton was 25 years old back then. Similarly, 50-year-old Jada also admitted she was in an entanglement with the 29-year-old rapper, August Alsina during a tell-all episode with her husband, Will Smith, on their Red Table Talk show last year.

Eventually, Will Smith won the Best Actor award on the night, for his performance in the biopic King Richard, a movie about the father of tennis players Venus and Serena Williams.

While delivering his acceptance speech, he apologized to the academy and his friends, but failed to mention Chris Rock, whom many thought rather deserved an apology for the physical assault he suffered.

However, Smith took to social media in less than 24 hours to make a sarcastic post about how he and Jada dressed up only to choose chaos before rendering an apology to Chris Rock.

The Will Smith/Chris Rock slap moment at the Oscars has been met with strong opinions and divided responses. The Academy leaders have strongly condemned Will Smith’s behaviour, in an internal memo sent by Academy President David Rubin and CEO Dawn Hudson.

The Academy also indicated that a formal review of Will Smith’s Oscars slap will take place on April 18, with member of the Academy’s governing board, Whoopi Goldberg, predicting big consequences for Will Smith’s actions.

Chris Rock’s brother Tony Rock, defended his older brother on Twitter, saying he doesn’t approve of Smith’s public apology before noting that Chris is “fine” after the incident and also shut down claims that Chris and Smith had patched things up.

Chris Rock is yet to make a public statement, or he may be saving it for the stage during his next performance as some websites claimed to have sold more tickets for his upcoming show after the Oscars incident than they did in a month. Ticket prices jumped from $46 to $300, a clear example of “every cloud has a silver lining”.

The Oscars viewership this year was up from last year’s historic low but hasn’t rebounded to pre-pandemic levels. 16.6 million viewers tuned into the 94th Academy Awards ceremony on March 27, according to final same-day ratings information from Nielsen.

The abuse of Chris Rock, however, recorded a dip in viewership during the show. That shocking moment between Smith and Rock has already become the subject of late-night television commentary, with the majority of the late-night hosts siding with Chris Rock.

This unprecedented Oscars moment raises a number of questions. What is the distinction between disrespect and jokes?

When Is a Joke No Longer A Joke? Did Will Smith Just Set All Comedians Up For Abuse?