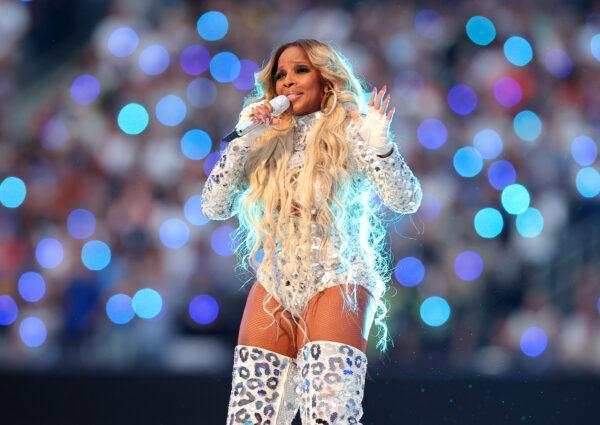 The weekend is bursting at the seams for singer Mary J. Blige. In addition to her performance at Super Bowl 56 in Los Angeles, alongside Dr. Dre, Eminem, Snoop Dogg, and Kendrick Lamar, the Yonkers native dropped her 15thstudio album, “Good Morning Gorgeous.”

After performing the lead single from this project, “Rent Money,” a vibey jam with Harlem rapper Dave East, on an iHeart Radio special with host Angie Martinez, she talked about the song’s inspiration.

She stated that the song was born out of her painful and very public divorce from Martin “Kendu” Isaacs.

The Queen of Hip-Hop/Soul said, “Rent money is [about] when I first got divorced.”

“I had to give up all this alimony, and I didn’t have no more money to give because he had spent it all,” she explained. “So, I had to go, you know, I had to go on tour, and make all the money back to pay the alimony.”

The multi-Oscar nominee says that her finances were so stretched that she didn’t have the resources to pay for housing.

“I didn’t have no money to pay my rent and all this other stuff,” she continued. “But it’s also a metaphor like, I didn’t have my soul. I was just drained of everything. So it was time for somebody to pay; sometimes you just feel like somebody gotta pay.”

In 2017, Blige was ordered to pay $30,000 a month in alimony to her ex-husband. Originally, his lawyers requested quadruple the amount to help him sustain his lifestyle. Issacs claimed that he “has experienced physical manifestations of stress and emotional distress from this matter, which has caused him to become hospitalised.”

The singer’s former manager further claimed that he had become “unemployable,” and without her financial support he would be “destitute” and paying rent has become “impossible.”

She wasn’t the only person angry. Around the same time as Mary was ordered to pay alimony to Isaacs, so was her R&B soul-singing sister, Toni Braxton, a celebrity wife who was in the same shoes … designer stilettos.

The “Wasn’t Man Enough For Me” singer said, “Yes. I had to pay alimony. I was one of those girls,” she stated. “It’s me, it’s Britney [Spears], it’s Halle [Berry], Mary [J. Blige] allegedly. I was very, very angry about that. But it was because we had an existing prenup and postnup. I wanted to renege; I’m going, to be honest.”

“Rent Money” has hit all the music streaming services, and the video dropped on Feb. 11, on the same day as “Good Morning, Gorgeous.”