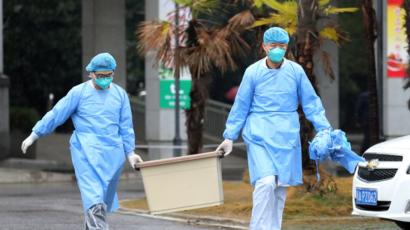 The government has dispatched cartons of assorted local food items to China to be distributed to 151 Ghanaian students stranded in Wuhan, the epicentre of the new coronavirus disease.

Foreign Affairs Minister, Shirley Ayorkor Botchwey who announced this, said the items had been shipped to Ghana’s Mission in Beijing for onward delivery to the students in the locked-down Wuhan city.

Speaking at a meeting with a delegation from the National Union of Ghana Students (NUGS) Tuesday, February 18, Madam Botchwey further disclosed that her Ministry has granted approval for the Ghana Mission in Beijing to expend an amount of ¥100,000 (USD$14,286) to cater for emergency needs, such as provision of nose masks, hand sanitizers and food items, especially for Ghanaians in Wuhan and its environs.

“Additional amounts of US$50,000.00 and US$200,000.00 have been transferred separately to the Mission in Beijing to cater for the emergency needs of the students. The Mission is working with the student leadership in Wuhan to collate the names and bank details of beneficiary students. The accounts of students are expected to be credited by Wednesday, 20th February 2020,” she said.

The delegation had called on the Minister at her office to discuss the outbreak of the coronavirus in China and the safety of Ghanaian students resident in Wuhan, the epicentre of the outbreak.

According to her, the Ministry has also held meetings with the Chinese Ambassador to Ghana and has received assurances from the Ambassador that the Central and Provincial Governments of China as well as authorities of the Universities in Wuhan, would continue to step up efforts to ensure that the concerns of Ghanaian students there are addressed in an expeditious manner.

Touching on the evacuation of the students from Wuhan, Madam Botchwey said that would be undertaken only as a measure of last resort.

She acknowledged the general apprehension among parents in Ghana, whose children are in Wuhan as well as a section of the Ghanaian community, mainly students and sympathised with the difficult situation as they face the unfortunate lockdown.

The Minister informed the leadership of the students’ body that a National Technical Coordination Committee, with experts from various health and security agencies, including the Ministry of Health (MoH), Ghana Health Service and the World Health Organisation (WHO), has been formed to assess the country’s state of preparedness.

She assured the importance the government attaches to safeguarding the health, safety and wellbeing of Ghanaian nationals in China, particularly those in Wuhan.