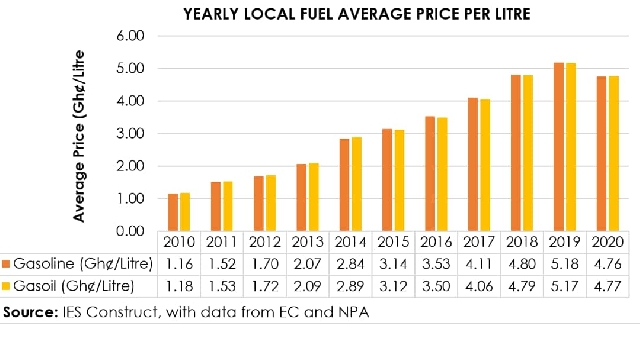 Key determinants of local fuel prices at the pump include; global crude oil price, prices of finished products on the world market, the foreign exchange (Forex) rate of the Cedi to the US Dollar, and the taxies and levies that are slapped on price per litre of domestic fuels.

The Ex-pump price (which is the price the public buys fuel at the various filling stations) is a sum of Ex-refinery price, Export Duty, Taxes/Levies, Marketers and Dealers Margins. The Ex-refinery Price constitutes the cost of product on the international market, insurance, freight, and other related charges. The Taxes/Levies include the Price Stabilization and Recovery Levy (PSRL), Road Fund Levy, Energy Fund Levy, Energy Debt Recovery Levy, and the Special Petroleum Tax (SPT). The margins cover the Primary Distribution Margin (PDM), BOST Margin, Fuel Marking Margin, Marketers Margin, and the Dealers (Retailers/Operators) Margin.

Prior to full deregulation of the downstream petroleum sector when consumer price for fuel was below the supply cost, government intervened through various forms of subsidization because it had the exclusive right to do so through the NPA. The interventions of government in a way distorted the market as it created perverse forms of incentives. This resulted in unnecessarily high pump prices, which were not a reflection of international market. However, the introduction of the full deregulation has seen Oil Marketing Companies (OMCs) actively negotiating prices with Bulk Distribution Companies (BDCs) as competitive market forces largely influences the current pump prices, to the ultimate benefit of consumers.

Even as price deregulation and the falling prices of crude oil over the past decade offered a great opportunity for fuel consumers to spend less on the commodity, the poor performance of the Cedi against major trading currencies, and the introduction of addition taxes/levies, eroded the benefits presented to consumers.

But for some government fiscal policies which led to the introduction of new taxes and margins over the past five years, prices could have been much lower than we see at the pump today. The introduction of a Special Petroleum Tax (SPT) of 17.5 percent in the 2015 fiscal year, the upward adjustment in the Road Fund Levy (RFL), the Energy Debt Recovery Levy (EDRL) and the Price Stabilization and Recovery Levy (PSRL) in 2019, plus the 100 percent increase of the BOST Margin, fundamentally aided in seeing pump prices go up.

Additionally, historical data from the Bank of Ghana (BoG) and the US Energy Information Administration (EIA) show that the performance of the Cedi on the Forex market greatly affects the Ex-pump price Ghanaians pay, than crude oil prices does.

Had it not been the global Covid-19 pandemic, the price of domestic Gasoline which sold at GHS5.30 per litre in early 2020, and currently sells at GHS5.10 per litre, could have been more than GHS6 per litre today. It may be recalled that crude prices slumped in 2020, hitting a 21-year low of US$16 per barrel in April, and trading at negative US$30-plus; first time oil price has turned negative. The spread of the virus significantly dented demand for crude and finished products due to restrictions imposed, thus plunging prices on the world market. The corresponding effect is that the average price of Gasoline and Gasoil in Ghana for the year 2020 was GHS4.76 per litre and GHS4.77 per litre respectively; an 8 percent reduction over the previous year’s average of GHS5.18 per litre and Gh¢5.17 per litre, according to IES MarketScan.

No contract has been signed for construction of sky train – Amewu

E-levy to shoot up remittance cost