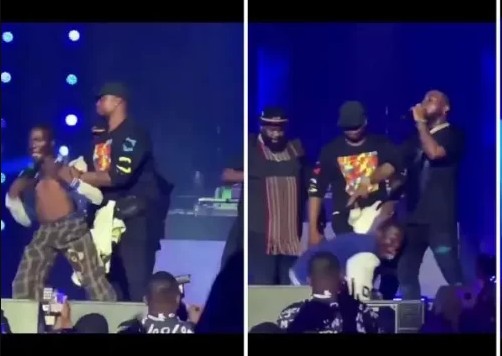 A security man during the Rick Ross Live in Concert held at Eko Hotel, Lagos, threw a fan off the stage after he interrupted Davido’s performance.

In videos posted on social media, the fan took a chance to join Davido on stage while performing with Rick Ross at the event held during the weekend.

A visibly displeased Davido ignored the fan and continued with his performance.

The man then went on to dance in front of the audience. However, his moment of bliss was cut short when one of Davido’s security held on to him in an attempt to send him off stage.

But, despite being held on to, the excited fan kept dancing, and in a split moment, the security man threw him off the stage into the crowd.

This, however, did not stop Davido from performing.

Hip-hop star Rick Ross was in Nigeria for an Exclusive Meet & Greet with some of Nigeria’s finest celebrities and influencers to celebrate the re-launch of his favourite drink brands, Luc Belaire and Bumbu rum.

He held a welcome party and later the Live in Concert show which saw many celebrities, including Tiwa Savage, Rema, Patoranking and Buju, perform.