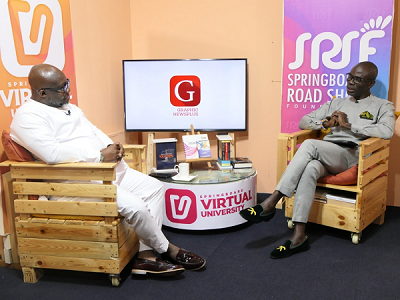 At 38 years, George Andah had an encounter with Uncle Ebo Whyte who challenged him to write a book by age 40.

George decided to wait another decade to accomplish more and undertake the challenge by his 50th birthday.

It took him another two years, but last month, he finally published a book that chronicles his life experiences, ideas, and lessons learned.

But George Andah is not your typical everyday author, so why the decision to write a book?

“I primarily wrote for the youth of Ghana and Africa to tell them that it is possible. I also wanted to share a bit about my decision to go into frontline politics.”

Even before entering frontline politics, George Andah had already made a name for himself in the corporate space.

From being the Brand Manager for Guinness Foreign Extra Stout and eventually becoming the Marketing Director and the Innovations Manager for Guinness Ghana Breweries Ltd, to the Chief Marketing Officer for the then Scancom Ltd., a member of the MTN Group, Chief Marketing Officer of Bharti Airtel Nigeria, and Country Manager/Chief Operating Officer of Glo Mobile’s Ghana Operations, among many other positions, George Andah boasts of a CV, many young executives would die for.

And for someone who has achieved so much in the marketing space, one would have thought that George’s journey as a marketer started from his school training.

Interestingly, George studied Biochemistry for his first degree at the Kwame Nkrumah University of Science and Technology (KNUST). It was his second degree in Marketing that became the turning point in his career.

“Your mission is what God has planted in your heart and the impact you seek to create in society. It’s the joy that comes from touching lives like you’re doing here at Springboard.” He told Rev Albert Ocran in a discussion in The Engine Room series on the Springboard Virtual University Programme.

Growing up in at Ridge in Accra, George Andah saw a post in the room of his brother Eddie “I cried that I had no shoes until I met a man who had no feet.” That post became his signpost for fighting the challenges and setbacks he would later encounter in life.

You might have heard of the popular phrase “Ghana man time” where punctuality is thrown to the wind and people tend to start any event or program at the time most convenient for them. But for George Andah, punctuality means responsibility and it all started at Achimota School

“Being a bellboy at Achimota School taught me to be punctual. Extra curricula activities help to broaden your horizons and bring out the leadership and organizational skills in you.”

At KNUST, George organized the first-ever Kojo Antwi concert on campus for the Republic Hall Week celebration, and it was a blast. The SRC requested a repeat show, and according to him, it was a financial and technical disaster. Notwithstanding, he learned valuable lessons about supervision and the inherent dangers in the assumption that success is replicable.

The hallmark of a great leader is the number of people he has trained to take over from him when the time comes for him to move on, and George has always subscribed to that line of thought.

“I always handpicked and groomed one or two potential successors in case I had to move on. They often turned out so well that I often felt my leaving was justified to create room for them.”

George also indicated that he deliberately opted not to stay in one career role for too long. “I believe that with career movements, you learn from different roles, and different teams and test your ideas in different environments.”

George Andah is on a mission to do more and who knows, perhaps another book is in the offing. Or his business or political life is just about to jet off in a different direction. His passion to do more was fueled by the advice received from his late mother.

“My mom called me the final time before she passed and charged me to do more with my life, and that has stayed with me. Till today, I pause to think whether she would approve of something I am about to do.”

He charged the youth to cultivate the art of listening, noting that there is power in listening to what others are telling you. You may not always agree but listening helps you to make better judgements.

He cited the Member of Parliament for the Efutu Constituency, Alexander Afenyo Markin, as one of the people who constantly challenged him while he was with Occupy Ghana to step into the fray of active politics and directly contribute his quota to national development.

“People like Kwamena Bartels, Frank Damali, Gaddy Laryea, Norkor Dua and the late Torgbor Mensah influenced my professional journey and taught me so much of what I know.” He told Rev Albert Ocran when asked about the role of mentors.

Springboard is a virtual convocation of great minds and emerging leaders every Sunday on radio, television and online to share their life stories, experiences, lessons learned, and their impact on society. George Andah will feature in a two-part series slated to air on Sunday, May 15, 2022.