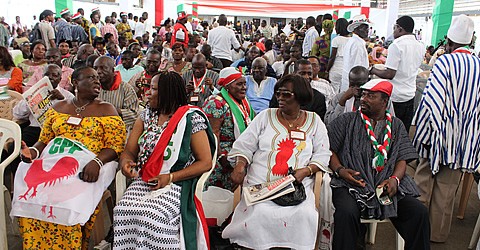 The highest decision making body of the Convention People’s Party, the Central Committee (CC), has interdicted Nana Yaa Akyempim Jantuah, the General Secretary of the CPP.

Speaking at a press briefing at the headquarters of CPP, the Communication Director of the party, Sylvester Sarpong Soprano, confirmed the interdiction of two other national leaders of the CPP, that is, the 1st Vice Chairman, Onzy Nkrumah and the National Youth Organizer, Osei Kofi Acquah.

According to the Committee, the actions and inactions of the trio contravenes the party’s Constitution and defeats the terms of reference as dictated by the Court.

The interdicted National Executives are to appear before the Disciplinary Committee of the party.

In a press statement announcing the decision, the CPP stated that despite 15 months of vibrant posturing and activism of the Chairperson, Nana Akosua Frimpomaa to push the Party to the limelight, “certain persons in the CPP have vowed to keep the party comatose and have devised unethical and inferior tactics to discredit the political gains of the glorious CPP.”

“It will be recalled that barely two months ago, the party reached a court settlement with mandatory orders backed by the Council of Elders of the Party, to re-organize the party and hold elections from the grassroot level (Polling station), Electoral area, Constituency level, Regional level, National level, and the elections for the Flagbearer of the Party, at least two years before the Presidential elections in Ghana – when in opposition.

“This is in the wisdom of the founding fathers of the Party, in order that the party has enough time etc, to prepare for the Presidential and Parliamentary elections in Ghana,” it added.

According to the National Communications Director (DoC), the interdicted persons had consciously and consistently thwarted all efforts by the Central Committee (CC) to carry out it’s mandated duties.

The interdiction letters demands of the affected persons, the return to the CPP, all party properties in their possession/custody and warned them to desist from carrying themselves by their elective and appointed portfolios forthwith.

“This will go down in the political history books of the CPP, as the beginning of the rise of a serious and highly competitive Convention People’s Party,” it concluded.