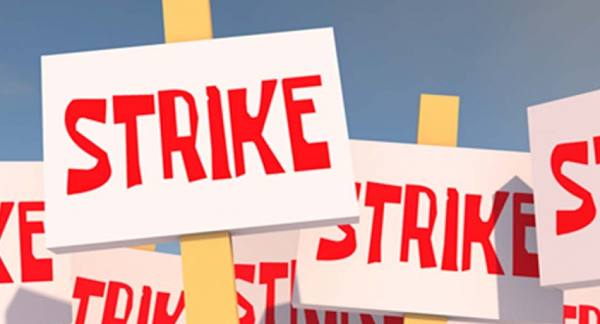 The Civil and Local Government Staff Association, Ghana (CLOGSAG) is continuing with its strike action despite an earlier assurance from the National Labour Commission (NLC) that workers will remain at post.

On April 20, Executive Secretary of the NLC, Ofosu Asamoah, said due to the timely intervention of the Commission after a stakeholder meeting held on Wednesday, the CLOGSAG strike to be held on April 21, had been called off.

He told JoyNews “there will be no strike going on tomorrow [April 21]. I have personally spoken to the CLOGSAG General Secretary; there is no strike.”

But despite his assurance, CLOGSAG, last week Thursday embarked on their strike to register their displeasure over the non-payment of their neutrality allowance.

In the Ashanti Region, Ghanaians began to feel the absence of members of the Civil and Local Government Staff Association, Ghana

On April 22, Government offices at Adum in Kumasi were closed with some doors having red bands tied to them.

A number of customers who visited these offices for their personal businesses were left stranded.

It is a new week and CLOGSAG has not announced the return of members to their respective posts to resume work. This implies that Ghanaians who will require the services of the Social Welfare Department among others will be left unattended.

Why neutrality allowance for CLOGSAG?

The Deputy Employment and Labour Relations Minister, Bright Wireko-Brobby, says the allowance payment will reinforce the group’s commitment to be neutral.

He said although government has agreed to pay the allowance, the name for the allowance has not been firmed up completely.

“For them, they make a case that they cannot attend any political programme, therefore, do not get anything from the political landscape, and then they are committed to staying neutral and will not get any form of allowance or whatever.

“They are deprived of those things and, therefore, government must help them to stay neutral. So that allowance is what they have put forward, and we have agreed that we have to look at this, but it is not firmly agreed on the name to give to it, but this is the rationale.”

“They think that we must look at this and see if we can do something about it for them so that their neutrality is reinforced or committed. So this is where we came to and agreed that no problem.

“We will look at the form and pay. It’s only about the payment and not the name. We think that these are our chief advisors, so we don’t even want to discuss our matter because they advise the government publicly.”

But the President of IMANI-Africa, Franklin Cudjoe, has described the allowance as fraudulent, saying it is entirely wrong for the government to pay it.

As a result, he has called for the immediate abolishment of same.