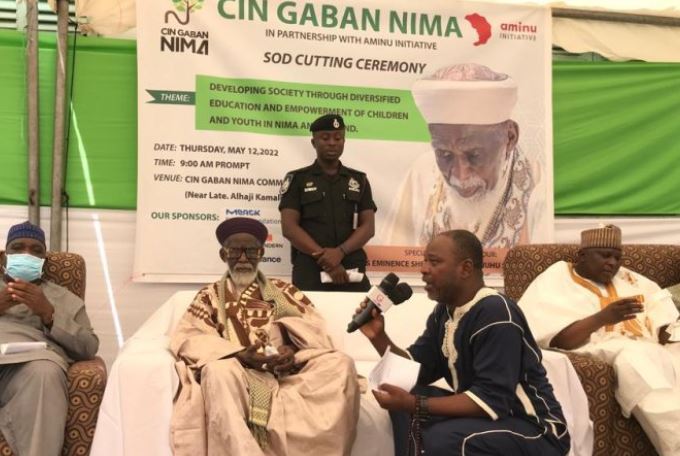 The National Chief Imam, Sheikh Osman Nuhu Sharubutu, on Thursday cut the sod for the construction of a new community centre in Nima to promote women empowerment and girl child education in and around Nima.

The centre to be constructed by ‘Cin Gaban Nima’ a community based Non-Governmental Organisation, is to create a facility for children to learn after school, provide guidance and counselling to persons in the community who, due to stress, are battling mental health disorders,

It would also create the opportunity to provide young people with scholarships and funding for higher education.

Dr Faisal Garba Muhammed, Member of the Board of Directors, Cin Gaban Nima, said the foundation intended to raise more than 500,000 dollars for the project, and this would be done both internally and externally from friends.

He said he would also help with grants given him for community development.

“This old structure is going to be demolished for a new four-storey building to be constructed. Our source of funding for this project will be contributions made within ourselves, friends, NGOs and grants from donors,” he said.

He noted that the facility was for the community and as such even though the Foundation had ideas on how to utilize the space, it had to consult residents to know their needs.

According to him, research conducted by the Foundation revealed that the community lagged in terms of girl child education and as such, emphasis had to be made on that.

He said “the foundation will do everything within and beyond its reach to see to it that the community becomes one of the best as “Cin Gaban Nima” in Hausa means ‘Moving Nima forward’, in English.

Yushau Ali, Advisor, Cin Gaban Nima, added that the foundation was established to change things that had gone wrong in the community for the past 50 years and make it a better habitat for the residents and the generation to come.

He said the project was not only to empower the youth, women, and children within the community but, it was also to enhance and empower them so that in next five years, massive change would be seen in Nima.

Cin Gaban Nima is a community-based, Non-Governmental Organization that seeks to reduce the educational deficit in Nima and other underprivileged parts of Ghana by creating avenues for the acquisition of skills.

The foundation has established projects such as “One Love” and “Junior Programme” for underprivileged children where they are offered a safe place during their academic years and a comprehensive scholarship program that supports them with education, health and overall welfare.