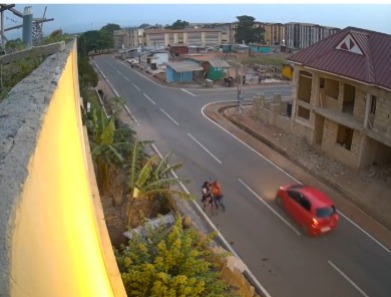 Two men have been captured on CCTV camera attacking a woman at gunpoint in a broad daylight robbery.

The incident is said to happened at a location called Adenta SSNIT FLAT on Sunday, March 20, 2022.

In the video which has gone viral on social media, a man wearing an orange top over a pair of jeans trousers is seen running after the woman with a pistol and subsequently assaulting her with the weapon.

Obviously frightened, the woman threw her handbag on to the road. The armed man then went for the bag, jumped back onto the motorcycle and the two made away with the bag and its content.

Meanwhile, the Ghana Police Service is yet to comment on the incident.