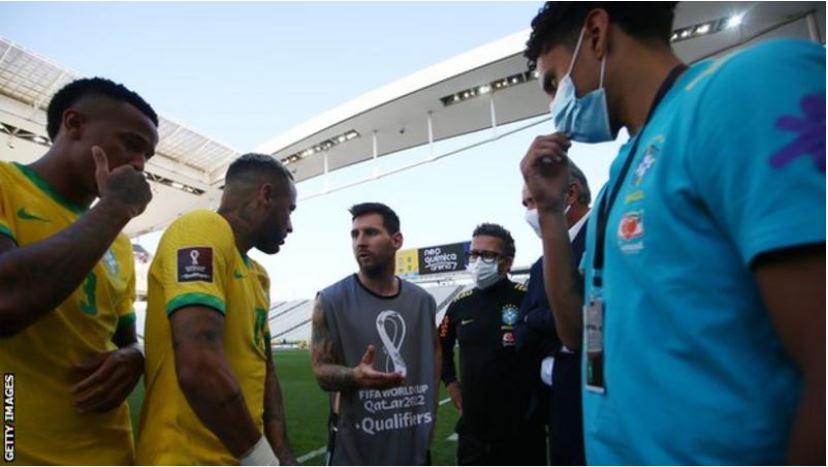 Fifa have banned four Argentina players – three from the Premier League – after September’s World Cup qualifier against Brazil was abandoned for not following international match protocols.

Aston Villa’s Emiliano Buendia and Emiliano Martinez and Tottenham’s Cristian Romero have been sanctioned and will miss the final two qualifiers.

The match in Sao Paulo was halted after kick-off as health officials felt the players had broken quarantine rules.

The dramatic intervention from Brazilian authorities striding onto the pitch came just five minutes into the qualifier at the Corinthians Arena on 5th September.

Fifa’s disciplinary committee said the match will be replayed on a date and location to be decided by football’s world governing body.

Both Brazil and Argentina have two games remaining but have already qualified for the finals in Qatar later this year.

Following an investigation, Fifa banned Buendia, Martinez and Romero, as well as Villarreal midfielder Lo Celso, on loan from Tottenham, for two matches. That rules them out of the remaining home game against Venezuela and away trip to Ecuador.

Brazilian rules at the time stated anyone that had been in the UK in the 14 days prior to arriving in the country must quarantine for 14 days immediately upon arrival.

The Argentine Football Association said the team complied with all health protocols.

But Fifa handed fines to both countries for the following: