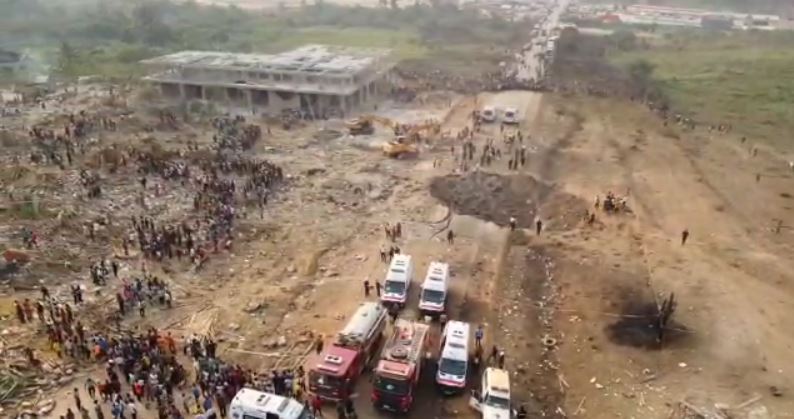 The Police have disclosed that the driver of the truck that exploded at Apeatse on Thursday, was of great help to the community.

According to ACP Kwesi Ofori, the driver, after the collision, hurriedly went to the community’s school to inform the teachers. The students were therefore whisked away to safer ground thereby minimising the number of recorded casualties.

“And for the driver knowing what he was carrying, was of help to the community here. He quickly rushed to the school and informed the teachers about the danger that was to come,” he stated.

ACP Ofori intimated that, “had it not been for that, we would have recorded a higher number of casualties.”

His comment was in reaction to an allegation by a survivor of the explosion to the effect that, the driver of the exploded truck, did not inform the residents about its content.

According to survivor, for close to 30 minutes, residents were at the scene at the peril of their lives, unknowingly. He said the concerned citizens could not have known that the vehicle contained explosives.

“We ran to the scene and the vehicle was ablaze. The fire was intense so we couldn’t get close to the vehicle. All those who lived around came out. We couldn’t tell exactly what vehicle it was and what it contained. There was smoke all around.

If someone said the driver told us the car contained explosives, it is a lie. The driver got down from the vehicle and left. He didn’t tell us there were explosives so we could run. We were there for more than 30 minutes. We were there wondering when the Fire Service would arrive because there was traffic congestion,” the survivor said on Joy FM’s Super Morning Show on Friday.

The survivor, therefore, blamed the driver for the many casualties recorded on Thursday.

But ACP Ofori in an interview on JoyNews’ The Pulse on Friday, refuted the claims. He insisted that the driver did a diligent work when the accident occurred.

“He also announced to most community members to move out, including the motor rider and they rushed out to safety,” he added.

He disclosed that the driver of the truck is in good health and the motor rider is currently responding to treatment.