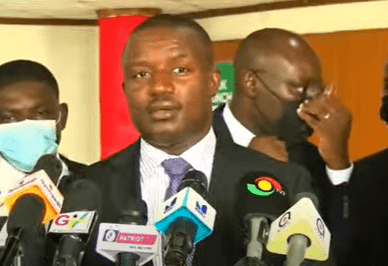 Member of Parliament (MP) for Yapei-Kusawgu Constituency, John Jinapor, has reacted to the decision by the 1st Deputy Speaker, Joseph Osei-Owusu, to overturn the ruling of the Speaker, Alban Sumana Kingsford Bagbin.

On Tuesday, February 22, the Minority group, led by the Ranking Member on the Finance Committee, Ato Cassiel Forson, moved a motion which was for Parliament to constitute a bi-partisan committee to look into the activities of government with respect to Covid-19 expenditure.

Joseph Osei-Owusu, who doubles as the MP for Bekwai, assuming the role of the Speaker in the absence of Alban Bagbin, threw out the Minority’s motion for a probe into the government’s covid-19 expenditure.

According to him, the motion ought not to have been admitted by the Speaker in the first place.

But reacting to the 1st Deputy Speaker’s action, Mr. Jinapor expressed his dissatisfaction and disappointment in him for dismissing a motion admitted by Speaker Bagbin.

He argued that per the Standing Orders of the House, Joe Wise’s ruling is null and void and illegal.

“Standing Order 79 is clear how these things are done. It is the Speaker who can admit such a motion. The issue of admitting ability has been achieved. It is the House that will determine whether to accept it or not and not the Deputy Speaker to overturn an admitted motion,” he revealed.

He noted that there are also procedures that must be followed before a ruling over a motion admitted by the Speaker can be made in the House.

“The House has the mandate to overrule the Speaker in the House and we know how we do it. So, what the 1st Deputy Speaker should have said was yes, the Speaker has admitted it but the House has decided through voting that we have disagreed and we won’t table it,” he said.

“So do you know what the 1st Deputy Speaker has done? He has turned himself into an Appeals Court judge. Yes, that is what he is doing,” he said while speaking on Metro TV.

He added that there is nothing wrong with the Minority group calling for accountability with regards to government’s covid-19 expenditure.